"My work is a way for me to go to the planets without the physical trip, and to meet myself when I get there." Paula Rice

This collection hails from a planetary art exhibit at Lowell Observatory during the summer of 2009, in Flagstaff, Arizona. Entitled "The Planet Series: Figurative Interpretations of the Planets Around the Sun -- A Sculpture Project" by artist and professor Paula Rice, evoking the human sense of the mysterious and desire to grasp the universe surrounding us.

The newspaper of Northern Arizona University (NAU) describes her work as:

Rice’s humanlike planets not only set out to capture her experience of the universe as “loving, intelligent and harmonious,” they also incorporate the empirical evidence of planet surfaces provided through photos from the Hubble Telescope.

“My new work is a way for me to imagine a reality incomprehensively vast and bring it down to human size,” Rice explained. “The series is about us here on Earth. For the first time in human history, our sense of place and the size of our imaginations have to stretch to include new information about these worlds.”

She said each ceramic planet features new landscape and surface information from the space photography.

I visited this art exhibit and fell in love with the Greek-like forms of planets as human figures. The text below each photo was taken from the exhibit itself. 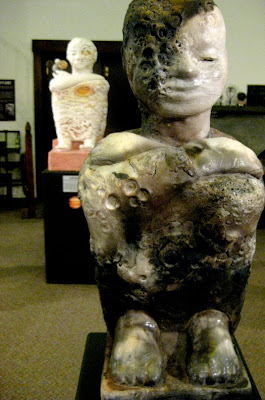 Mercury is the closest planet to the sun and the smallest of all the planets in our Solar System. Its surface is pocked with impact craters. Mercury is a world of fire and ice, with temperatures reaching 750 degrees Fahrenheit (400 degrees Celsius) during the daytime, and dropping down to -200 degrees Fahrenheit (-129 degrees Celsius) during the planet's long nights. 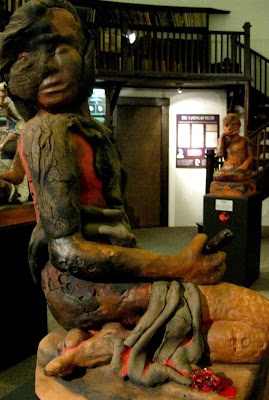 Venus
with Asteroid
Ceramic and cast iron; oxidation-fired and smoked
Known as Earth's sister planet, Venus compares with our home planet only in size and mass. Our closest planetary neighbor is shrouded in a dense cloud cover containing sulfuric acid droplets and an atmosphere that consists almost entirely of unbreathable carbon dioxide. These clouds produce a greenhouse effect that drives temperatures to an average of 900 degrees Fahrenheit (483 degrees Celsius).

Most features on Venus are named for real and mythical women; examples are craters Eve, Sacagawea and Cleopatra.
~ ~ ~ ~ ~ ~ ~ 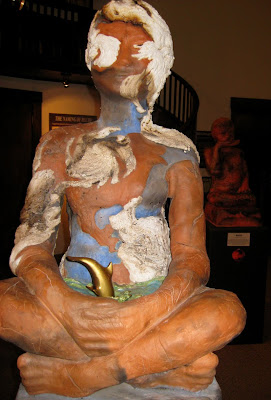 Earth
Ceramic with glazes; metal; oxidation-fired and smoked
The third planet from the Sun is the only body in the Solar System where water exists in all three phases: solid, liquid and gas. Two-thirds of the Earth is covered with water, but even the driest deserts on our home planet harbor life. 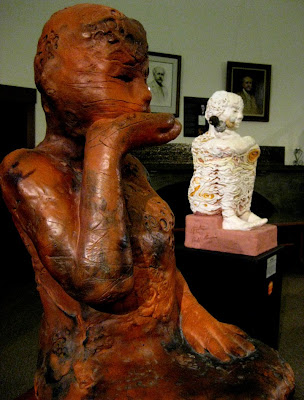 Mars
Ceramic with glaze; oxidation-fired and smoked
The most-studied planet in the Solar System, Mars is both familiar to us and mysterious. Streaky markings and dusky patches change with the Martian seasons; dust storms occasionally cover the entire planet. Water was once abundant on the Red Planet, as indicated by ancient shorelines, channels and lakebeds. 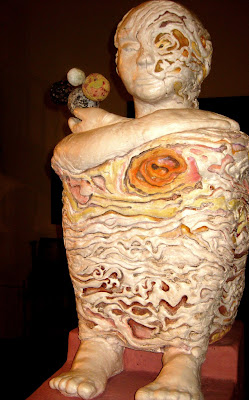 Jupiter
Ceramic with slips and glazes; oxidation-fired and smoked
This giant among the planets is eleven times the diameter of Earth. Its hydrogen and helium composition, in combination with other elements, lends vivid colors to Jupiter's dense clouds. The Great Red Spot, a huge whirling cloud system, has been in existence for at least several hundred years. The four largest of Jupiter's 63 known moons (called the Galilean moons) can be seen with binoculars from Earth. 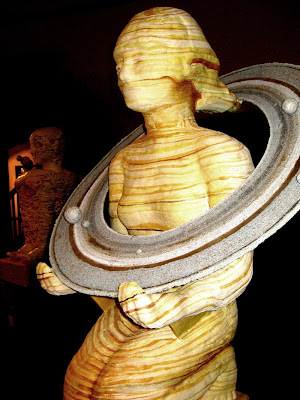 Saturn
Ceramic with lusters; fiberglass (by Ivan Bronston); oxidation-fired
Like Jupiter, Uranus and Neptune, Saturn is gaseous with no solid surface. It is characterized by its brilliant rings, a complex system comprised of billions of chunks of ice, each in its own orbit around the planet. Its average density is less than that of water; in a large enough ocean, Saturn would float. 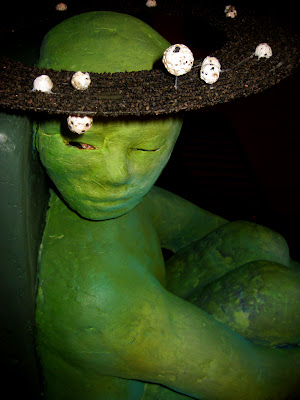 Uranus
Ceramic; fiberglass (by Ivan Bronston)
The first planet discovered with a telescope, Uranus is twice as far from the Sun as Saturn and four times larger than Earth. Methane gas imparts a greenish-blue color to an almost featureless globe. Uranus and its ring system are "tipped over," likely the result of a cosmic collision billions of years ago. 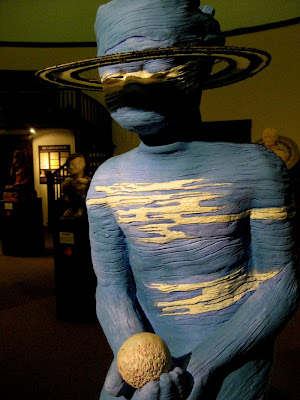 Neptune
Ceramic with underglazes and glazes; fiberglass (by Ivan Bronston); oxidation fired
Although similar in size and composition to Uranus, Neptune reveals unique features. High winds drive prominent cloud belts and blue storm systems around the planet. Like the other gas giants, Neptune has a ring system and many moons. 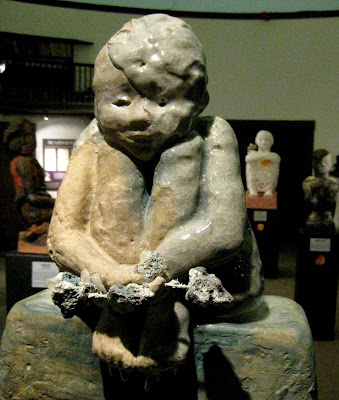 Pluto
with Kuiper Belt Objects
Stoneware with underglazes and glazes
Pluto was discovered in 1930 at Lowell Observatory by Clyde Tombaugh, a young research assistant. It was officially reclassified as a dwarf planet in 2006. Small, cold, and icy, Pluto orbits the Sun on the fringes of the Solar System along with thousands of Kuiper Belt Objects.